The Jamaica Observer Limited and the Jamaica Olympic Association (JOA) on Tuesday signed a landmark multi-year partnership agreement that will see both entities joining forces to deliver promotional and development support for stakeholders at all levels.

The agreement will see the Jamaica Observer being identified as the official media partner of Jamaica’s Olympic movement with the multi-media company committing to provide assistance on a number of initiatives geared towards creating opportunities for local sporting interests, while further establishing the media outlet as the leading destination for sports content.

In addition to providing advertising support and media training opportunities for athletes, coaches and officials, the Jamaica Observer will also assist with the JOA’s digital and social media buildout, the development of special publications, and support for the JOA’s Stamina and Olympic Women in Sports projects.

“Jamaica as a brand is very well known and the people in the Jamaica Olympic Association are certainly to be credited for reinforcing the value of that brand at every opportunity they’ve had to showcase the very finest of Jamaican talent. We here at the Jamaica Observer are very pleased to have forged a very special relationship with the Jamaica Olympic Association and, in fact, as we sign today, that relationship has already been in force by the very special coverage we’ve been able to deliver of the recent (Commonwealth) Games,” Rogers added.

In addition to guaranteeing, for the Jamaica Observer, certain commercial opportunities for its products as well as entitlements at major events, such as the Olympic Games, Pan American Games, and the Central America and Caribbean Games, the JOA will also provide support for a number of educational projects which will be delivered by the Jamaica Observer’s editorial team.

JOA president Christopher Samuda believes the agreement will go a long way in helping his organisation to continue to provide value for its stakeholders and partner associations.

“I really want to thank the Jamaica Observer for having the foresight. This partnership is very special to us because we feel that in sports, we have a duty and responsibility to not only inform and educate but also enlighten,” Samuda said.

He was joined at the signing by JOA CEO and Secretary General Ryan Foster as well as Honourary Treasurer, Nichole Case.

“It is a responsibility that I think we take very seriously because at the Jamaica Olympic Association we deem ourselves to be changemakers, innovators, and therefore we have to change the landscape in sport. We have to not only tell of statistics and events, but we also have to telegraph value in the reports that we do and I’m very confident that the relationship will bear this,” Samuda added.

“We are policymakers and we are ensuring that as an Apex body, we are making policies that will of course be enduring and will be beneficial to all stakeholders in sport.”

“At the Jamaica Observer, we feel very strongly about our obligations to the development of our nation and sports has long been identified as a significant tool where social intervention is concerned and of course, it provides many opportunities for our people,” said Chin.

“We believe that this agreement and others will allow us to play a more active role in providing opportunities for Jamaicans and also towards the development of our sporting capital,” Chin added. “Our readers know that they can come to our products for the very best in sports content and this partnership will help us to take them closer than ever to the stories that matter.” 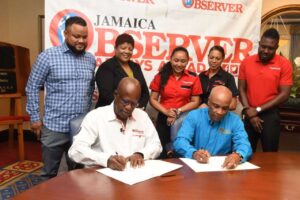